50 Years in the Making: Lebanon Center 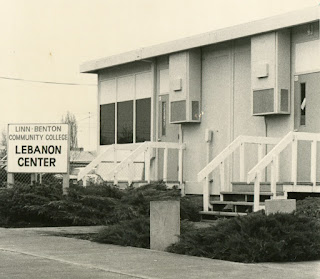 In 1981, the center relocated to a 19-acre site at 2600 Stoltz Hill Road, which encompassed seven acres of donated land and 12 acres of adjacent land purchased by the college.

For some, the Stoltz Hill location was a bit off the beaten path, and in 1986, the Lebanon community and the Chamber of Commerce requested the center to move downtown. The former J.C. Penney building on 550 Main Street was donated to house the center, and the Stoltz Hill site was put up for sale.

The new location offered three times the space as the Stoltz Hill facility. In 1988, the college received a state economic development grant to remodel the building, which was completed in 1990.

As the community grew and the college expanded class offerings in Lebanon and East Linn County, the need for more space became apparent. A 1994 purchase/donation agreement with James River Corporation gave LBCC ownership of approximately six acres of the historic Elkins Mill site at 44 Industrial Way.

In 2000, the passage of a $19.1 million bond allowed the college to begin construction of a 44,000-square-foot center. LBCC partnered with local workforce agencies to create a one-stop center, the East Linn Workforce Development Center, to provide community members access to a variety of public services and education in one location.

Construction also included an additional 2,500-square-foot annex with meeting rooms, a kitchen, restrooms and reception area, along with the restoration of the historic Elkins Mill on site, which was built between 1871 and 1878.

On May 31, 2001, the new LBCC Lebanon Center and East Linn Workforce Development Center was dedicated. Today, approximately 1,700 students take at least one class at the Lebanon and Sweet Home Centers each year.