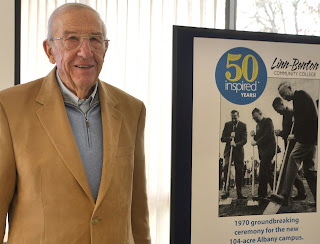 Sweeping out an old barn in 1967 so students could attend class there was not in his job description as a college board member. But sweep he did.

Some 50 years later, LBCC Founding Board Member Russell Tripp would find himself celebrating the college’s 50th Anniversary, held September 29, 2017 – just not in a barn.

Through the years, Tripp has seen the college transform from those early days in ’67, holding classes in barns and basements and serving 2,400 students, to a 104-acre Albany campus, centers in Corvallis, Lebanon, and Sweet Home, and serving more than 19,000 students and community members today.

Advocating to bring a community college to Linn county, Tripp was elected in 1967 to serve on LBCC’s first board of education.

That first board had a lot of work ahead of them to get the newly-formed college up and running, including appointing the first college president, Dr. Eldon Schafer, who put out a lofty goal to have the first classes start in September of that year.

“It was the busiest time of my life,” said Tripp in an interview with LBCC’s student newspaper. “It’s very encouraging to see all that has taken place, not only in Albany, but Lebanon, Corvallis, and Sweet Home. It’s more development than we ever thought would take place, we knew it would be a great thing for this community.”

The board would spend those early years forming the basis for LBCC’s policies and philosophies which would carry the college forward.

In 1979, after 12 years of service, Tripp retired from the college board. That same year he was honored with LBCC’s Distinguished Service Award and an Honorary Associate Degree for his contributions.

In 2004, Tripp and his wife, Duffy, help fund a renovation of the college theater. Upgrades included state-of-the-art lighting and sound system, and new carpet, paint, curtains and reupholstered seats. In recognition of their contribution, the theater was renamed to the Russell Tripp Performance Center.