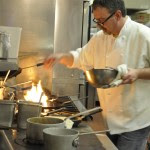 Cosponsored by Ten Rivers Food Web and LBCC’s Culinary Arts Department, this event showcases food and those who produce and process it from Benton, Linn and Lincoln counties.

The chefs will select from an array of all local ingredients to prepare an entree of their own design. Entrees will be judged by last year’s competing chefs, including 2011 winner Michael Waliser of Saffron Salmon in Newport; Jason Devrouax of Clemenza’s, Albany; Nathan McClure, OSU Catering, Corvallis; and Chad Pope, Cappies Brewhouse, Albany.

During the competition, guests can sample products from local farms, restaurants, food businesses and LBCC Culinary Arts student creations during the Food Fair held in the Commons dining room. Many of the products will be available for purchase.

The Food Fair will shine a light on women farmers and food entrepreneurs, highlighting the ever-growing local food system ran by women. Guests also can bid for the culinary services of LBCC Culinary Arts Chef Scottie Hurley during a silent auction.

New to this year’s competition will be a bake-off, featuring bakers from the Ten Rivers Food Web region who will turn assigned ingredients into unique treats for guests to sample and vote with their dollars.

Sample brews from the new Twisted Snout Brewery from Toledo, wine from Lumos in Philomath and hard cider from Two Towns Ciderhouse in Corvallis will be available for those 21 and over with the $10 passport.

Advance tickets are $8 at First Alternative Co-op stores in Corvallis, Mennonite Village in Albany, online at www.tenriversfoodweb.org, or for $10 at the door.