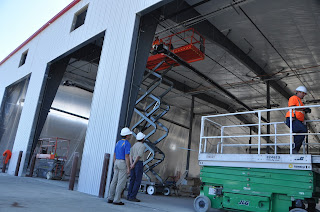 Linn-Benton Community College will hold a Grand Opening for its new Innovation and Heavy Equipment Center at 2000 Oak Street in Lebanon Thursday, October 20.

Tours of the new facilities will be given after a brief program, which begins at 11:15 a.m. and is open to the public.

The 37,000-square-foot training center includes state-of-the-art equipment to train students in heavy equipment and diesel repair, and an Innovation Center, which offers space for industry to train employees and test equipment. Training will also be offered in alternative fuels for heavy transportation vehicles.

The diesel program’s move from the college’s Albany campus brings all transportation training programs onto one shared campus, opening up space for expansion of the other college industrial programs.

The Advanced Transportation Technology Center’s first building opened for classes in the fall of 2013, becoming the only major broad-spectrum training facility between Seattle and San Francisco for students to learn repair and maintenance of gasoline vehicles and those that run on alternative fuels such as compressed natural gas, propane, electric and biodiesel.