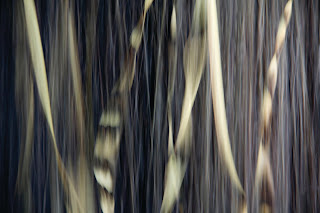 An exhibit of motion-based photography entitled Dancing with Light, Painting with Time by Kurt Norlin and Jeff Hess will be on display at South Santiam Hall Gallery at Linn-Benton Community College, 6500 Pacific Blvd. SW, Albany, February 3 to March 17.

The artists for this exhibit of colorful abstract photography both use motion blur as the basis for the mark-making in their imagery. However, they create their images in distinctly different, even opposite ways.

Using a digital camera and pinhole lens, combined with deliberate, subtle camera movement, Norlin creates visual elements which he then layers and combines in Photoshop to create his final image. As Norlin says of his own process, “Part science, part art, and part ritual, the process allows me to literally draw with light.”

Hess is a Corvallis photographer who does almost the exact opposite thing to create his graceful photographic impressions. The work included in this exhibit is of a series he refers to as “temporal painting.”

In it, Hess applies “brushstrokes of light” via the movement of natural materials–such as grains, leaves, petals, or berries–in front of a stationary camera. Each image is a single exposure of the camera that records the flight of the objects through space.

Norlin and Hess will share more about their process and ideas at an artist reception held in the gallery Wednesday, Feb. 17 from 11 a.m. to 12:30 p.m. The reception is free and open to the public. Food and beverages provided.

SSH Gallery is open Mondays through Fridays from 8 a.m. to 5 p.m. More information about LBCC Art Galleries can be found at www.linnbenton.edu/artgallery.

By Linn-Benton Community College - April 07, 2014
Oregon Construction Contractors Board Education (CCB) will be offered through the Small Business Development Center at Linn-Benton Community College. This five session course will meet on April 22, 29, May 6, 13, and 20 from 6 p.m. to 10 p.m., on the LBCC Albany campus, Calapooia Center room CC-213. The course is required for CCB licensing as part of the education requirement before taking the State of Oregon CCB exam. Participants are required to attend all five of the state-approved sessions to satisfy the educational requirement for Oregon contractor licensing. Topics include employer requirements and employee rights, Oregon lien and contract law, taxes/recordkeeping, best business practices, project and time management, estimating and scheduling, building codes, OR-OSHA requirements, job site safety, environmental laws, and test taking strategies in compliance with ORS 701-280.  Advance registration is required by April 18. Cost for five sessions is $290
Read more

By Linn-Benton Community College - March 21, 2016
A variety of art classes, including a few new ones, are being offered through LBCC Community Education starting March 28. In the new class “Art & Etsy,” learn to polish your craft and sell your art. Bring your own product to polish up, or bring to life a new creation. Immerse yourself in product design and then create a catchy shop name and an inviting online presence. This one-day class meets Thursday, April 7 from 1 to 3:50 p.m. at the LBCC Lebanon Center, 44 Industrial Way, and Friday, April 15 from 1 to 3:50 p.m. at the LBCC Benton Center, 757 Polk Ave, Corvallis, and Saturday, April 16 from 10 to 12:50 p.m. at the LBCC Albany Campus, 6500 Pacific Blvd. SW. Cost is $39. The new class “Mosaic Mashup” helps you create a mosaic masterpiece from recycled materials. Incorporate paper, glass tiles, ceramic tiles, and a wide selection of other materials. Leave with your own unique piece of artwork. This one-day class meets Thursday, March 31 from 1 to 3:50 p.m. at the LBCC Lebanon Cen
Read more

We've moved! Check out our website for current LBCC news!

By Anonymous - August 30, 2018
We are no longer adding news items to this blog. For the latest LBCC news, please check out our website at http://www.linnbenton.edu
Read more