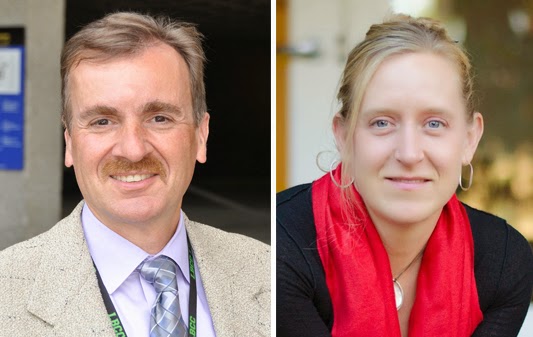 They will be recognized at the annual Alumni Reception at LBCC’s Albany campus May 7 at 7 p.m.

Gaulocher, of Menlo Park, Calif., is currently the Director of Community Engaged Learning at Stanford University. With a focus on health, she works across Stanford’s seven schools, guiding faculty, students and community partners to increase community engagement and service learning opportunities, along with public service internships for Stanford undergraduates.

Prior to Stanford, Suzanne worked at the University of Wisconsin’s University Health Services as a researcher and evaluator. She also worked on the Center for Disease Control’s Community Transformation Grant, and was part of a team providing support and evaluation nationwide for Communities Putting Prevention to Work, in which storytelling was used as a tool to improve health policy and communication at the local level.

Gaulocher attended LBCC from 1992-1994. She transferred to Oregon State University where she earned a bachelor’s degree in cultural anthropology, and she earned a master’s degree in Public Health and Interdisciplinary studies and a doctorate in environment and resources from the University of Wisconsin.

Stowell, of Albany, is the Executive Director of Institutional Advancement and Foundation at Linn-Benton Community College. He oversees efforts to inform the community about LBCC, to increase private and public support of the college and its students, and to connect people with LBCC programs and services that help them participate in, contribute to and benefit from the cultural richness and economic vitality of our area.

Stowell has received more than a dozen state, regional and national awards for his work as a journalist and in marketing and public relations. He worked as part of team that helped a Washington Catholic hospital losing $500,000 a month reverse its fortunes to realize net revenues of $1 million a month, expanding its ability to fulfill its mission of providing health care for the poor.

Stowell also worked in the Washington community college system for 17 years, implementing systems that better connect and prepare incoming students to get a strong start on their educations, increasing their success and completion.

Stowell grew up in Philomath and attended LBCC from 1977-79, studying journalism. He transferred to Portland State University where he earned a bachelor’s degree in English. He was hired by LBCC in 2012.