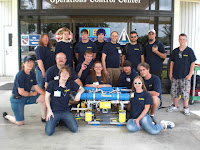 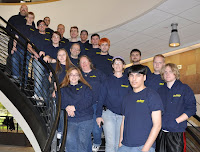 The team competed against ROV's from around the world, placing 3rd behind Purdue University and a team from California. LBCC’s team was one of only two teams to successfully complete all of the missions twice.

The final scores were based on a combination of the mission scores and scores for the team’s technical report, poster and oral examination.

"Michael Tilse is an artist who returned to school to study machine tool technology," wrote team advisor and LBCC physics faculty Greg Mulder. "He celebrated his 58th birthday while in Houston. The team has always known that Michael was our MVP – the team was overjoyed, ecstatic and possessed the biggest smiles possible when Michael was internationally recognized as not only having superior machining skills but also being a top-notch member of a team."

After the award banquette, the LBCC team worked with the Hong Kong team until 2:30 a.m. to plan how they might collaborate on future missions and competitions.

"I would like to thank the entire LBCC community for supporting the LBCC ROV team," wrote Mulder. "It is not an exaggeration to say that every division on campus played a significant role in helping these future scientists, engineers and technicians have an experience that they won’t forget and greatly help point them toward exciting and fulfilling careers."
Greg Mulder MATE competition NASA ROV team