By Linn-Benton Community College - December 10, 2012
Enormous candies and cupcakes. Giant snow-covered trees against a midnight sky. Life-sized fireplaces and chilly windows. These are just a few of the scenes created by LBCC art student Jessica Purkerson for Legacy Ballet’s upcoming performance of “The Nutcracker."


Purkerson created the scenes after a request from theater manager Leslie Hammond. She had also helped create the large paper cutout masks used in last spring's children's play. This time, the challenge for Purkerson was to create scenes that would transfer well to a large backdrop.

Purkerson was awestruck to see her conceptual 11-by-22 inch watercolors turned into 22-by-44 foot backdrops for the show. 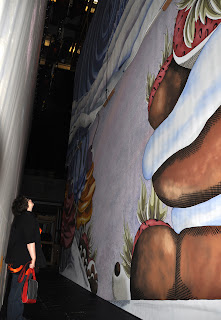 “It was so cool to see my paintings hanging from the ceiling,” Purkerson said of her watercolors, which hang in waiting in the Russell Tripp Performance Center in Takena Hall. 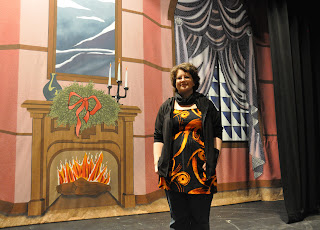 Amy Larink, a scenic artist based in Chicago, spent the month of November transferring Purkerson’s conceptual designs into four large backdrops and two sets of nutcracker legs. The first backdrop for the ballet is Clara’s house, with a fireplace and large windows encrusted with snow.

Purkerson used a technique of sprinkling salt on the wet watercolor, which brings out the moisture and some of the color to leave a textured look.

“It was amazing to see that Amy was able to incorporate that look into the finished backdrops,” said Purkerson. “I’m really excited for the performance, to see how everything comes together.”