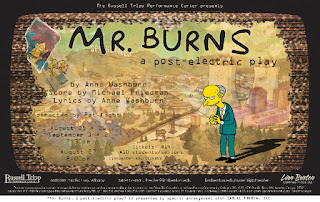 Set at a time after the apocalypse, Anne Washburn's thought-provoking dark comedy starts with the animated sitcom “The Simpsons,” as a group of survivors sit around a campfire and try to recall the TV show’s "Cape Feare" episode.

Years later, those survivors become one of many wandering theater troupes keeping civilization alive by performing classic TV episodes. As society rebuilds, do our pop culture memories become the new mythology, the new religion? Considering “The Simpsons,” is that such a bad thing?