Active Shooter/Weapons Incident Training: How to Respond
The LBCC Campus Safety Committee continues its work and training on emergency response in the event of an active shooter situation on campus. Managers, deans and faculty are being trained on protocols, and they in turn will train staff in their areas. Everyone is encouraged to read the  protocols on the Public Safety site, and, if you have a Smart Phone, to download the Public Safety App, which links directly to the officer on duty. Always report behaviors or talk that is concerning, no matter how small they may seem. The Public Safety site has instructions on what you can do to be as prepared as possible, along with links to informative training videos. 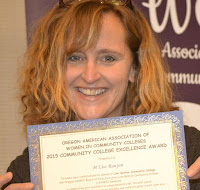 Twila Lehman, business faculty member, received the 2015 Distinguished Service Award from the Oregon Business Education Association at their annual fall conference in October. Twila has been a  faculty member in Business Technology for more than 26 years. She has been instrumental in creating and updating business courses at the college, and served as the Benton Center Business Technology Program Coordinator for ten years.

M'Liss Runyon, graphic designer in the College Advancement Marketing office, received the LBCC Chapter of American Association of Women in Community Colleges Excellence Award at the annual conference held in November. The award is given each year to a recipient for accomplishments that made a difference for women at their community college.

The Theater Department just completed a fourth season of presenting the "Traveling Children's Theater" to local elementary schools throughout Linn, Benton and Polk counties. Taught by Tinamarie Ivey, the theater has traveled to numerous elementary schools performing for hundreds of students. The first half of the quarter, our students create an original Balinese-style shadow puppet play based on popular children's literature. The second half is spent waking up early, packing the van, traveling and then performing. The course, along with the department’s Community Engaged Play-making program Sanctuary Stage, are wonderful examples of how the Theater program strives to enrich our community through cultural outreach. 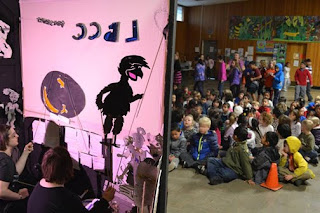 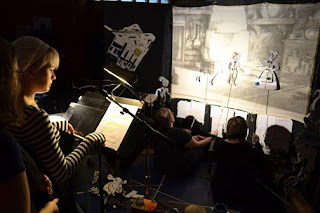 In Remembrance:
Retired colleague Patsy Chester died Friday, Nov. 27 at her home in Albany. She was 73. Patsy began her career at LBCC in September 1968 as a part-time, non-contracted faculty member in the Business Division, teaching business technology. She held a contracted faculty position from June 1972 to June 1985. In July 1985, Patsy became director of the Business Division. In 1991, she moved to the position of assistant to the president for Academic and Administrative Affairs, and in 1998, she was promoted to dean of that office. Patsy was instrumental in developing the LBCC/OSU Dual Admission and Enrollment Program, now the Degree Partnership Program. She was a statewide leader in education reform and high school partnerships, and was recognized for her work in establishing the statewide 2+2 Program, which became the College Now at LBCC. Patsy retired in 2001, but continued to work part-time for the college as director of Educational Partnerships, a position she held until “officially” retiring in November 2012. Patsy received the LBCC Distinguished Staff award in 1995. In 1994, she was named Vocational Administrator of the Year by the Oregon Council of Career and Vocational Administrators, and in 1990 was named Administrator of the Year by the Oregon Business Education Association. For 20 years, Patsy served as a basketball-scoring assistant for the college. She also served the Northwest Athletic Conference (NWAC) as the Women’s Athletic Commissioner for 12 years, as a NWAC Executive Board member for two years, and, in 2002, she was inducted into the NWAC Hall of Fame. An avid golfer, Patsy was instrumental in the formation of LBCC's annual Foundation Golf Tournament, which has become a major fundraiser for the Foundation, and handled scoring of the tournament for many years. A memorial service was held Thursday, Dec. 3, at Fisher Funeral Home. 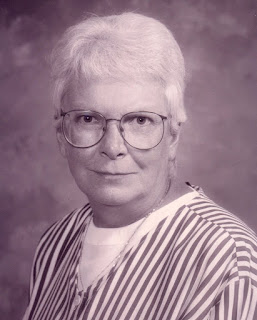 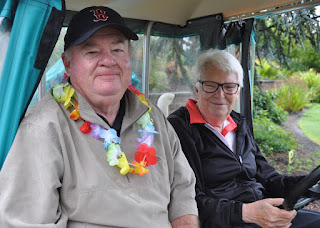 Patsy Chester, 1995 Distinguished Staff photo, and in a golf cart with former VP Mike Holland, from the 25th Anniversary Foundation Golf Tournament in 2013.