On May 18, 1993, LBCC buried a time capsule to commemorate its 25th Anniversary, to be opened a quarter-century later in the then-futuristic year of 2018.
That year, LBCC held its first Diversity Week, welcomed its first second-generation child to the Family Resource Center daycare on campus, and started its first online library card catalog, all while coping with a hiring freeze prompted by budget shortages under Oregon's Measure 5.

Jon Carnahan, LBCC president back in '93, dedicated the original time capsule, placing it in the ground with the help of long-time LBCC grounds manager George van Keulen. Both men were present to dig up the capsule they helped bury 25 years ago.

The 1993 capsule held a variety of artifacts of the times, including a cassette tape of messages from Family Resource Center children on what they wanted to be when they grew up, VHS tapes of construction work on campus, floppy disks, and a newspaper advertisement for LBCC's $11.6 million bond measure, which voters passed in 1994.

During the event, the college dedicated a new time capsule, to be opened 25 years from now in the year 2043. LBCC President Greg Hamann placed the first three items into the new capsule: a bottle of Roadrunner Red IPA made by Deluxe Brewing in honor of the college's 50th anniversary; a baseball signed by members of the current, 30-game-winning streak team; and a pair of safety eclipse glasses used to view the 2017 total solar eclipse.

Other items going in include a fidget spinner, a printed copy of the Albany Democrat-Herald, and a flash drive containing all the issues of the campus newspaper, the Commuter, from 1970 through May 2018.

Time capsules are important, said President Hamann, because they remind us of both the ways we have and haven't changed as a community. That's something that hasn't changed about LBCC, he said, adding: "We really are, and will always be, a community college."

The celebration also included a giant birthday card that was signed by current and former LBCC students and staff. Robin Tate, a 1995 business management graduate, signed the card, saying some things really haven't changed, such as the quality of the education.

A 1982 South Albany High School graduate, Tate enrolled in LBCC in 1993. She was a single mom coming back to school to earn a business management and marketing degree.

"They were just very supportive," she said in an interview with the Albany Democrat Herald newspaper. "Whether you were just out of high school or that single mom, you went out great."

Tate’s birthday message to the college reads: "Happy 50th, LBCC. Thanks for giving so many such a good foundation."

Note: Jon Carnahan was hired in 1973 as director of Admissions, and later served as vice president of instruction. He became LBCC’s fourth president in 1989, serving until 2003. George Van Keulen was hired as grounds keeper in 1990.

Items from the 1993 time capsule have been scanned and are archived in the college Library Database at: http://libarchive.linnbenton.edu/collections/kh04dp81k?locale=en 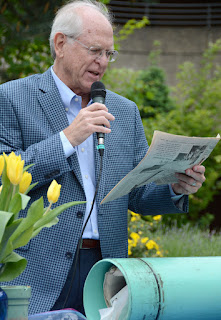 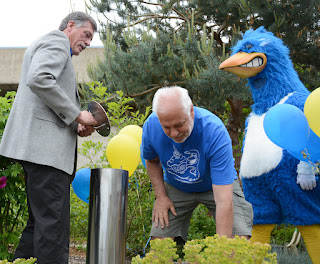 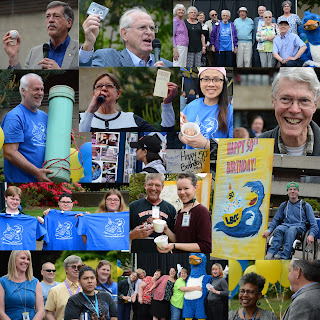